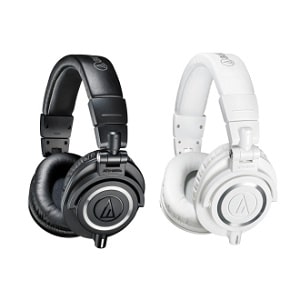 Search for ‘best monitoring headphones’ online and chances are you‘ll stumble across the Audio Technica ATH-M50x at some point or other. A cult classic, it falls under the company’s M-series (designed for monitoring) and is considered an upgrade from the original M50. While made for studio use, their lightweight design and portability mean that they double as a handy pair of on-the-go headphones.

Monitoring headphones are characterized by their flat response, and are often used by professionals such as sound engineers and music producers to hear audio as they are, without an amped up bass or scratchy vocals. In this case, the M50x delivers, along with clear and accurate sound reproduction.

Featuring large 45mm drivers backed by rare earth magnets and copper-clad aluminum wire voice coils, users can expect detailed and well-balanced sound with a tight bass..The flat response also allows for a non-fatiguing listening experience, so users can have their music or audio in for hours on end.

The headphones have a wide frequency response of 15Hz to 28,000 Hz, and are able to handle both low and high frequencies with exceptional clarity. Tracks with low bass pack a powerful punch, while trebles are crisp and sparkly without being overly bright, unlike models like the M70. There is a slight dip in the mids (especially vocals), but the overall quality is still clear and well-defined.

For a pair of closed back headphones, the M50X has a surprisingly wide sound stage: traditionally the domain of open-backed headphones such as the Sennheiser HD 598. Comparing the two, the M50X performs extremely well with a life-like quality that is very rare in closed-back headphones. Despite their ‘flat’ response, the M50X still manages to pull off sounds that are lively and dynamic, whilst still retaining a high-end flavour to satisfy more discerning ears.

They have a low impedance of 38 Ohms, making them suitable for portable music devices such as MP3 players and smartphones, without the need for an amp or equalizer. They are fairly sensitive at 99dB, and the volume can be tuned up high with minimal distortion.

While the company claims that the M50X has the exact same specs as its predecessor, the M50, the audio performance is somewhat enhanced and fine-tuned in the newer model. The bass is richer and more detailed, as are the mids and trebles. Switching back to the M50 after listening to the 50X, the former’s audio quality seems veiled and cloudy. The performance is not a significant upgrade if you already own a pair of M50s, but if you’re planning on buying a new pair, the M50X has a slight edge over the older model.

As an everyday user, you might ask the difference between M50X and ‘popular’ models like the V-Moda M-100. The latter is made for bass-heavy tracks with an emphasis on treble, and has a leaner overall balance. We can’t say which one is better than the other, as it’s a matter or preference. The M50X sounds good across all genres, while the M-100s favour electric, pop and hip hop over acoustic tracks.

Although they offer great audio quality and a flat response, some have argued that the M50X headphones are not the best in their category. The Beyerdynamic DT-770, for example, has an ideal mid-range which is perfect for vocals and rock music – outshining the M50X’s rather lacklustre mids. Meanwhile, models like the AKG 702 headphones trump the M50X with their extreme precision, which is especially useful when attempting to fine tune a specific note or set.

Within the company’s own M-series, the M40X has been touted as the better pair for studio monitoring, as they are more neutral sounding, even though the specs are very similar. Higher end models such as the A900X are also a step above with their super flat and accurate response. The M30X, which is the ‘budget’ version of the M50X, offers audio quality that is close, but no dice. The difference is not too noticeable unless you’re mixing or mastering professionally in the studio.

However, the M50X has something not offered by other models – balance.Despite their label as ‘studio’ headphones, they actually fall somewhere in between high quality headphones for everyday use and professional headphones for monitoring use. All the ranges play equally well, and instead of one overwhelming the other, they complement each other for a smooth and seamless sound.

The M50X is also playable with portable music devices such as smartphones without affecting the audio quality, unlike many monitoring headphones which require high spec-audio files to perform well. In short, the M50X offers the best of both worlds for audiophiles and casual listeners. 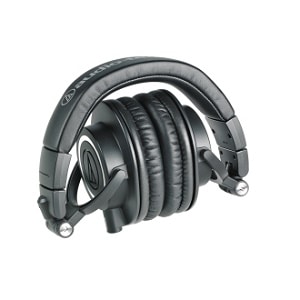 Open backed monitoring headphones, such as the AKG702, provide a more natural ‘live’ sound by allowing ambient noises to filter in, but they are notoriously bad with sound leakage and are not meant to be taken outside of the studio. The M50X, however, sports a closed-back design. Although lower frequencies are slightly muddied, they offer better noise isolation against ambient noises, making them a perfect companion for travel or work.

Users get two for the price of one – as they can be used for both studio-monitoring as well as listening to music on-the-go. Unless you’re blasting the headphones on really high volume, chances are your neighbour on the commute won’t be bothered by any sound leakage. Circumaural ear cups go over the ears and envelop them completely, further helping to reduce environmental noise. While they don’t have active noise cancellation like the Bose Quiet Comfort 15 or the Beats Studio, the passive reduction should be enough to drown out sounds of crying children or crowds in most situations.

Design wise, the M50X has not changed much from the M50, because why change a good thing? In fact, there is very little difference between models of the M-series such as the M30X and M40X – except for a few minor tweaks here and there. Measuring 11.4 inches by 10 inches by 4.1 inches, the M50X is still quite large, and the cups are almost certain to swallow up people with smaller faces. The large pads come with an advantage over headphones like the Sennheiser Momentum, as it gives the ears plenty of room to breathe.

Considering their size, the headphones are relatively lightweight at just over 10 ounces, although they are far from being the lightest in their category. The thick headband is padded for extra comfort and helps to distribute weight evenly over the head. The bar is adjustable and clicks smoothly between settings to fit different head shapes and sizes. For a customized fit, the M50X also relies on swivelling ear cups that turn up to 180 degrees.The headband does not grip too tightly, but it should help the headphones stay in place even with everyday movement.

Build is robust, and unlike some headphones which try to pass themselves off as ‘plush and luxurious’, with leather and steel finishes, the M50X carries its plastic and aluminium shell unabashedly. The material is in no way cheap, as the plastic is high quality, very durable and able to take a beating. The ring of metal inlaid into the ear cups adds a layer of reinforcement, while the headband incorporates a band of steel that helps to keep the headphones in shape even after taking hard knocks and falls.

Joints tend to be the bane of any headphones, being the part that wears out quickly due to constant opening and closing. No such problem with the M50X, as the joints are smooth and don’t creak. The cups fold down into a smaller size for easy storage.

While largely unchanged, the one obvious upgrade from the M50 is the M50X’s softer, more luxurious ear cup padding. Made from a pleather-like material, the pads are buttery soft and feel easy on the ears, providing hours of long-lasting comfort. The only drawback is the material tends to build up heat in warm environments.

Like most over-the-ear, DJ-inspired headphones, the M50X sport a cool and modern look that is sophisticated yet edgy. The design is not flashy or over the top, unlike the Beats. The headband is beefy-looking and terminates in a Y-shaped hinge, and the cups have a cool-looking Audio Technica logo etched into the side surrounded by a metal ring. They come in a variety of simple but elegant colors, such as black and white. The tan has a classy, vintage look to it.

Some might argue that Bluetooth headphones, like the Sony MDR-1BT, offer lightweight and cable-free convenience – but for monitoring purposes, wireless headphones are still not able to match the quality of their wired counterparts.

The main difference between the M50X and the M50 is their detachable cable. The M50X comes with not one, not two, but three generous cables in the box. There is a 1.2m straight cable for portable use, as well as a 3m straight cable and a 1.2m – 3m coiled cable for use at home or in the studio. The detachable feature really comes in handy when travelling. The cable is single-sided to prevent tangles, and is secured by a simple turn and lock mechanism. The cord seems sturdier than your regular, run-of-the mill cables, terminating in a heavy duty reinforced plug.

From these many features, it’s quite obvious that Audio Technica has made the M50X not just for the studio, but also for outdoor use. It is quite odd that they have not included an inline mic or controls on any of their cables. Sadly, Audio Technica has reiterated that it will not be including them. even in newer models. In this aspect, the headphones lose out to other portable ‘monitoring’ headphones like the Sennheiser Momentum. However, the fact that the M50X can be brought outdoors still makes them miles ahead of the competition.

Despite their ‘monitor’ status, the headphones are still good for everyday use, and their portability is definitely a huge plus. If you’re looking for something professional but still versatile enough to be used beyond the studio, then the ATH-M50X trumps the competition with their sound quality, audio performance, sturdy build and comfort. For their price point, you’ll be hard-pressed to find a better bargain.