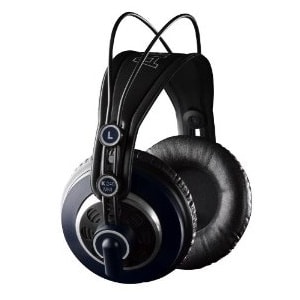 AKG K 240 headphones created a stir in the market and threw a lot of audiophiles into debate about bass this and treble that. The K 240 MK II headphones are a refreshing choice in their price category. These are professional headphones that favor a neutral, natural tone that simultaneously sounds exciting without tainting the music reproduction. AKG must have had to pull a lot of strings to pack such tonal balance at such a great price.  We are already sold. The fact that it carries all the bells and whistles of studio headphones is just the icing on the cake.

The highlight of AKG K 240 MK II’s audio response is the mids. Such smooth, rich, luxurious and buttery delight is like auditory parallel of Chocolate Eclairs. You are forced to sit up and take notice of Prince’s Purple Rain turning your insides into happy slush. The intricacies of the musician’s voice, Brad Arnold’s refined singing, the gentle yet intense thrumming of Santana’s guitar all create a divine setting. K 240 MK II is very natural sounding in the mid-range with a vast soundstage created by its semi-open design. Instrument separation has been executed well to add layers of details for the audiophile to discover. Highs are also just as well-maintained as the mids. They sound rejuvenating in their nature. Probably, this is why K 240 MK II ends up being stimulating, in spite of being a flat studio headphone.

Bass, the love-hate partner of mids has been kept punchy and tight in the AKG K 240 MK II. The sub-bass region needs a boost. So together, these two components will disappoint a basshead. But the all-knowing audiophile will approve of the bass and just connect it to a FiiO E6 amp and choose the bass boost option. E6 ramps up the bass without bloating it. Their 55 Ohm impedance would require a good amp with portable playback devices anyway. Treble sparkles right along with the mids without sounding harsh at high volumes.

K 240 MK II headphones are fun for professional use. They give you flat response without sounding too clinical with the details. Most of the professional headphones that can achieve that cost twice as much. Sound leakage through the semi-open edifice is not as bad as you would expect it to be. MK IIs are slightly more forgiving on bad audio and MP3 formats unlike Sennheiser HD 280 Pro which cuts through audio shoddiness like a knife through butter.

AKG K 240 MK II semi-open headphones are made of plastic with metal accents. Instead of sticking to the usual bulky earpieces and brawny headband designs that most professional headphones use, MK IIs have a cable-headrest suspension system. It has two sheathed cables running on top along with a self-adjusting head rest that sits on top of your dome and sizes itself accordingly. The headrest is made of pleather and applies much less pressure than usual headbands. Earcups are round and lined with doughnut-shaped replaceable cushions. These cushions almost entirely diminish the clamping pressure on your ears resulting in a highly comfortable fitment. K 240 MK II headphones also come with Velour earpads which can switch the pleather ones out. Velour earpads have a smaller opening in the center. 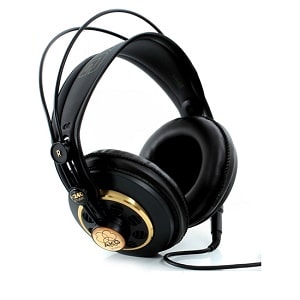 There are grooves at the back of the earcups of K 240 MK II headphones which lend them the airy soundstage.The left earcups carries a mini-XLR port with three pins that is used to attach the detachable cable. If you are looking to use aftermarket cables, it might a little difficult to find one that fits this plug. Two cables are included in the box of this professional headphone. One is a rubber-coated 3m straight cable with 3.5mm jack on the other end. Another is a 5m coiled cable that gives you some stretching room. The coiled cable is not as springy as the ones with, say ATH M50s, but then there’s the price difference justified. Both the cables look like they can stand the abuse of time and their owner. The MK IIs feel quite reliable and ready to get down in the studio.

Studio adapter: Since the AKG K 240 MK II headphones are meant to be professional headphones, a screw-on 6.3 mm plug is shipped with the box. It can be screwed on to the 3.5mm jack for use with studio equipment.

It’s almost too surreal to find a pair of great professional headphones in this price range. AKG K 240 MK II headphones have a flat response that will allow you to hear the recordings without any flavor added. That is the prime aim of studio monitors. They are not meant for casual listeners who like a little warmth and bass to their music. MK II does justice to all parts of the frequency spectrum. Their audio output can only be described as refreshing. These professional headphones easily counter some of the more expensive Sennheiser and Audio-Technica headphones. It ultimately comes down to personal preference whether you would choose AKG over those, but the price tag of AKG K 240 MK II headphones sure works in their favor.