The common perception is that wired headphones trump Bluetooth ones when it comes to sound quality – but the Beats Studio Wireless Headphones are out to prove everyone wrong.  At first glance, it’s easy to mistake them for the regular Studio headphones, since the designs are almost identical. However, the Wireless (surprisingly!) offers better sound as well as flexibility and convenience.

Let’s be honest – the Beats will never be first choice for audio purists. They were designed for bass-heavy music, and the Studio Wireless is no exception. Sound quality is actually better when compared directly to the Beats Studio, thanks to a new and improved digital signal processor and software dubbed the Beats Acoustic Engine. Designed to generate an emotional experience, they bring out the oomph in genres such as rock, hip-hop, pop, electronic and R&B.

Previous Beats models, such as the Solo HD and Pro, focused mainly on delivering powerful, punchy bass – sometimes at the cost of mids and highs. Sound tends to get muddied from the unbalanced emphasis on lower frequencies. Thankfully, the Studio Wireless has not overlooked their trebles, which are well-detailed and can hold their own. The mids need some working on, but perform a decent job with vocals that sound clear and crisp.

The headphones have a frequency response between 20Hz to 20,000Hz. While the response isn’t as flat or as accurate as monitoring headphones, the overall audio is balanced, smooth and non-fatiguing. The headphones sound warm and lively rather than artificial, which tends to be the case with some ‘flat’ sounding headphones.  There is still plenty of bass over other models on the market, but they do a good job at balancing them out with the other ranges.  The streaming process is not completely lossless, but it works in favour of the audio as it reins in the trebles just enough to ensure that high notes are less grating.

The Studio Wireless has a wide and spacious sound stage – like being at a concert with the band or artist playing live. Here, the headphones show their mettle, proving that they are not just a pair of bass beasts. Instrumentals, such as tracks with piano, are crisp and reproduced with crystal clear clarity, and it feels as if the musician is right there in the room with the user. The headphones are also able to transition well between beat-heavy tracks and acoustic ones.

Other than the fact that one is wired and the other is not, there is little difference between the Beats Studio and the Studio Wireless. As with most DJ-inspired headphones, the Studio Wireless is large and bulky-looking, with giant ear cups and thick band. The band is padded at the bottom with a rubbery material for a better grip, and is adjustable to fit different head shapes and sizes.

Unlike models such as the V-MODA M-100, the Studio Wireless headphones do not have swivelling ear cups.  The cups are rigid and circumaural, which means that they completely envelop the ears for passive noise isolation – although they also feature an adaptive noise cancelling feature. Their closed back design ensures minimal sound leakage for a private listening experience.

Style wise, the headphones are very easy on the eyes. Streamlined like a sports car, they feature smooth, rounded curves and a sleek, polished surface free from annoying screws and unnecessary embellishments. They have one of the most distinguishable designs on the market, thanks to their signature ‘b’ signage on both ear cups – so users can proudly show them off while on the commute. Meanwhile, foldable hinges allow the cups to collapse into a compact shape for easy storage. Weighing in at 9.1 ounces, they are not the lightest over-the-ear headphones on the market, but they’re also not the heaviest. The ergonomic design helps to distribute weight evenly across the head for long hours of wear.

Although the body is made from plastic, the material feels high grade and sturdy enough to take abuse. The cups are covered in soft, plush cushions for added comfort, although the material tends to build up heat in warm environments. They come in a variety of colors, such as white, blue, red, titanium and black matte or black glossy. The glossy ones build up fingerprints, but look modern and edgy when polished.

On top of the passive noise isolation provided by their over-the-ear style ear cups, the Studio Wireless has the added bonus of an adaptive noise cancelling feature.  There are two modes – one for music listening, which balances the music and sounds from your environment, and the other which is pure noise cancellation. Users cannot play music in the latter mode.

They also come with a built-in mic for making and answering calls. The mic quality is decent, with minimal static, and should be good for most Internet or phone calls. The left ear cup houses a circular call answer/end button which doubles as a one-button remote for music playback. Volume controls are also located on the same cup.

In case you ever need to play the headphones with wires, the Studio Wireless comes with a 3.5mm audio cable with Remote Talk controls, so you don’t have to fiddle with your devices. Also included is a USB 2.0 cable for charging. Last but not least, users will get a hard-shell carrying case with a carabiner clip.

The headphones run on rechargeable lithium batteries, with a helpful ‘fuel’ gauge indicator that tells users when they need to juice the device up. They have a decent battery life of 12 hours (wireless) and up to 20 hours (wired). The only downside is that once they run out of battery, the headphones will not play at all, wires or no wires. Pairing is easy and only takes a few seconds. The headphones have a range of up to 30 ft. 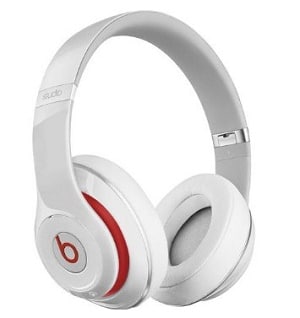 The audio performance is definitely impressive on the Studio Wireless – not just as a pair of Bluetooth headphones, but in general – even when compared to wired versions. Punchy yet crisp and smooth, they are comfortable to listen to for hours on end. The build is tough, materials are high quality, and they’re comfortable. Although they are pricey, their many good points makes these headphones a worthwhile investment.