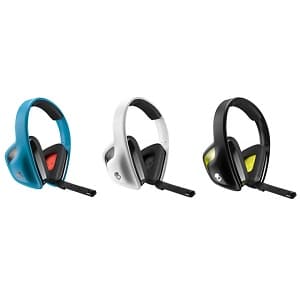 Skullcandy seems to be on a progressive track lately. Their designs have always been hep for the younger crowd but their audio is getting more responsible in the traditional sense of goodness. That’s why we were happy to pick up the Skullcandy SLYR gaming headset and happier still to listen to it. The fierce logo of Skullcandy feels like home on a gaming headset. And they have kept the theatrics to the minimum and created subtle colors while maintaining their uber-cool stance.  Compatible with PlayStation3, PS4 , PC and Xbox 360, these headphones are versatile in their use. SLYR gaming headset works with music playback just as well as it aides you in your adventures of Lego Indiana Jones 2.

Skullcandy has been rallying towards a balanced audio response for quite some time now. They ditched the overdone bass and went for a natural audio reproduction with punchy bass in the Hesh 2 headphones. SLYR gaming headset follows the same route. The era of all-encompassing bass that drowns out the sonic details and performance of mids and highs is gone. Instead, SLYR sports a rumbling bass, powerful and high-impact which kicks you alive to slay some orcs. The energetic thump of bass is all you need to enjoy a good game. But Skullcandy brought more to the table in terms of three modes: bass, supreme and precision. The supreme mode supports wide audio characteristics and sounds generally pleasant in every frequency region. Precision mode focuses more on positional audio and lets you pull off a bloodbath on Counter Strike: Global Offensive.Bass mode is the muddy bass-boosted audio that we originally expected of the SLYR gaming headset.

Mids and vocals are around you in the SLYR. Unlike the Skullcandy IEMs, they are not banished by the high-and-mighty bass. They are right up there with bass, partnering well when you bark commands at your team or listen to their accented English from the other side of the world.  SLYR can show some very high volume when you ramp it up and the highs get sibilant only when the volume is all the way up.  Treble is a revelation too with good extension and a sparkling nature. It’s not crass as many gaming headsets turn out to be.

Due to the tonally neutral performance of SLYR gaming headset, it teams up well with portable audio players and home theatres. There is no 7.1 surround sound capability in this headset, but they do their stereo sound very well.Soundstage is limited in its nature and instruments sit together pretty snug. It depends on your experience as a gamer whether you can work with this amount of instrument separation or not.

Skullcandy SLYR gaming headset is comfortable for gaming marathons over weekends. Perhaps that’s the best certificate of physical design we can give this headset. It is light and springy. The headband will stretch out in time to fit your noggin. The earpieces ape the shape of your ears and encircle the average sized ears properly.Their soft padding ensures gentle contact with your ears and relieves most of the camping pressure. Cranial arch alone has some cushioning and if you are bald, this might be a problem.

The build of SLYR is mostly plastic. It comes in tame white or black colors with accented panels on the earpieces. One Skullcandy logo sits on the outside of each earpiece which is almost too humble for Skullcandy. The headset comes with a detachable 3.5mm male-male cable. This cable plugs into a GMX in-line mixer. This mixer is powered by a USB cable. It can be connected to the gaming consoles via a long cable that has RCA plugs with piggy-back female ports.  For PlayStation 3, PS4 and PC, you can simply plug in the USB cable of GMX mixer for audio. For Xbox you can use the 3.5mm ports or the RCA connections. The cables of the mixer give you a lot of moving-around space when you are playing.

GMX mixer controls:The GMX stereo mixer supplied with the SLYR gaming headset has a nubbin to control audio and chat volumes separately. A switch on the side is used to change between the three audio modes of bass, supreme and precision. Pressing it in the center will mute the mic.

Mic: The mic of SLYR retracts into a groove on the left earcup, when not in use. Audio through the mic sounds loud and clear. There’s no mic monitoring though, so you might find yourself shouting hoarse for no reason. 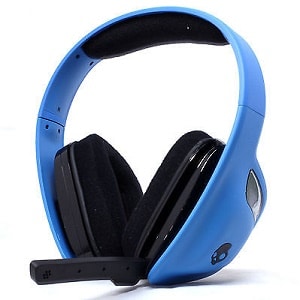 Skullcandy SLYR gaming headset is Skullcandy’s foray into the gaming market and we are impressed that they chose the harder way of good sound and tight bass. Their sound signature reflects the change in the company’s outlook on audio output.  The fact that they incorporated a GMX mixer and slipped in a detachable 3.5mm cable brings out the trademark quality that Skullcandy can take pride in. Brands like Sentey and Sades have noteworthy headphones at lower price ranges too that bang big for bucks. But Skullcandy SLYR gaming headset succeeds at creating healthy competition in the mid-range of gaming cans usually dominated by Turtle Beach.