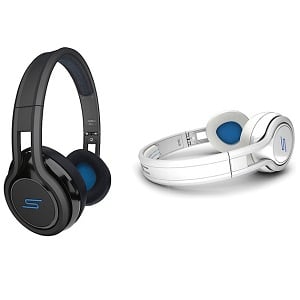 SMS Audio has been star-struck with many of their headphones sporting celebrity endorsements. While their DJ Pauly headphones are a good buy, we were surprised by their Street by 50 Cent wired on-ear headphones. Clearly meant to take on Beats by Dr. Dre, these headphones have a much better audio signature that sits well with the bass-preferring crowd without stepping on the toes of audiophiles. Plus they cost one-fifth the price of Beats. SMS Audio Street by 50 cent has some very funky colors in their arsenal that can pep up your day as you go about your chores.

SMS Audio Street by 50 Cent headphones are meant to put hip hop, electronica and rock right up with the bounce of party energy. 40 mm drivers produce the warm and enjoyable sound signature that the Street has. Although SMS Audio claims that these have professional-grade sound, the response is not flat to be so. The personal sign-off of 50 Cent means the audio has some flash. And sure enough the bass on these headphones is enhanced. It is full and detailed with nice expanse to make you hip and hop on the spot. Unlike Beats, they don’t let the mids and highs drown under the impact of bass. Instead bass is punchy and powerful in Street by 50 Cent without bleeding into other domains. Their THUMPP effect brings a nice depth to the lower end. There’s no muddiness or distortion of sound on account of bass. 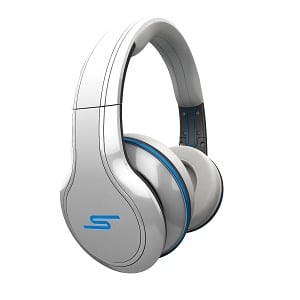 Mids and highs are clear. In some tracks you hear the resonance of lower end asserting itself ahead of vocals but they are balanced. They are not exaggerated so much that the sonic details are lost in the fray. Treble has the required amount of support for other elements but it does not match the details of higher-end headphones. The overall sound quality is a good fit for working out or playing bass-heavy tracks. Street by 50 Cent is forgiving enough on lossy formats and bad recordings that you can fire them up with the files on your portable MP3player.They just sound generally pleasant but with the clear punch of bass.

Even though Street by 50 Cent is a supra-aural headphone, it brings you a moderate amount of passive noise isolation from the earpads covering your ears. Sound leakage gets significant at high volumes so be careful not to crank it up all the way to the top.

SMS Audio Street by 50 Cent headphones have a very streamlined look. Made mostly of plastic, these headphones sport metal hinges for folding,creating a long-lasting architecture. Plastic body reduces the weight of Street so that it can perch easily on you head without any pressure.  Metal hinges are more practical in the longer run as hinges are the most crucial part of their articulating mechanism.When folded, the Street by 50 Cent reduces to the size of a pair of sunglasses and looks a lot like them as well. Earcups were round and are padded with memory foam cushions.  Headband is also cushioned with a similar material to offset its weight on head. The ear pieces are comfortably large.  Construction is pretty sturdy as the headband can bend over backwards without breaking a sweat. They sit comfortably on the head and you can wear them for hours together without any fuss. 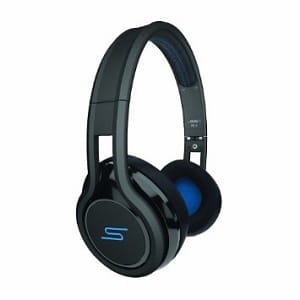 One perk of the Street by 50 Cent is that it has a detachable cable. It is shipped with a male-male cable which terminates in a 3.5mm jack that can plug into smartphones, MP3 players, laptops, tablets etc. It comes in some solid colors like black, red, green, blue etc. Orange and Pink colors team up with white earpads and interiors for sporty appearance.

Carry case: The SMS Audio Street by 50 Cent headphones are shipped with a carry case that packs them into a nice little portable package.

Inline mic and controls: The detachable cable of Street has inline microphone and controls for Apple devices.The mic works well, the audio is clear for the other side, although not noteworthy. 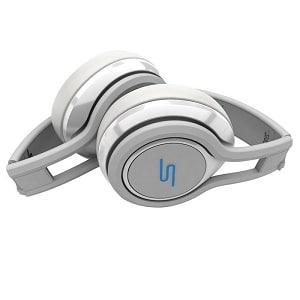 SMS Audio Street by 50 Cent headphones have a delectable price and an audio to beat the Beats. Beats do have premium build but they are awfully common which makes you want to look the other way.Their price tag is no joke either. And the Street shows up right down the street waving an inviting flag with 50 Cent wielding it irately. It does have uber-cool looks and a highly efficient folding design. The audio of the Street headphones is also crisp and clear and boosts bass with much more restraint. You don’t feel like bass was added by a juvenile on sugar rush in Disney Land. Rather it has the much needed power that a basshead will appreciate and reluctance to trash the mids and highs that audiophiles will laud. These headphones are for hip-hop, rap, electronica, R&B etc aficionados who want the bass to spice their audio up. And they come with enough gongs to be considered a good deal in their price range.