A new pair of Limited Edition headphones, released by Turtle Beach, boasts of the latest in design and technology to give gamers a definitive gaming audio experience.

Turtle Beach Corporation is an audio technology company that is well-know for its experienced audio technology and the innovation that brings into each product. It stays on top of emerging technologies and incorporates the same in each of its products. Though this company has more than 35 years of experience in audio technology market, its recent reverse acquisition between Parametric Sound and Voyetra Turtle Beach, has enhanced it experience and expertise.

Due to this partnership and the nature of its expertise, this company specializes in making audio peripherals for video game consoles and mobile devices under the brand name of Turtle Beach. Not only the name of the company, but its products are cool as well. Since these headphones come as a complete package with top class design, comfort and sound quality, Turtle Beach has been consistently rated as the number one gaming console headset manufacturer in the US. According to sales tracker NPD, this company has a 53 percent share in the audio headphones market.

With more than 27,000 headsets sold across major retailers such as Best Buy, Target and Walmart, Turtle Beach has entered into partnerships with companies such as Microsoft, Sony and Activision to introduce a new line of innovative headsets that are geared to the consoles and games developed by these companies.

The latest in this series of gaming headsets is the Call of Duty Black Ops II Tango Programmable Wireless Dolby Surround Sound Gaming Headset. One of the first things that users will notice about these headsets is their design. These headphones look sturdy and well-built because they are made of the finest quality materials. The head band is made of thick plastic that can support top quality leatherette used as padding to give uses utmost comfort. This head band ends in ear cups that also have a thick foam padding to allow users to wear it for long periods of time. These ear pads create a suction feeling that can be uncomfortable for some users. The other downside in terms of comfort is these ear pads are not sweat proof, so prolonged listening can make these ear pads moist, and over time it can feel uncomfortable. 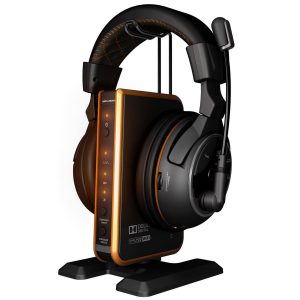 “This headset stands out for its design, comfort and high-tech functionality”

The entire headphone is black in color, with an orange rim on the ear cups. The idea behind this design is to match the color combination of the game Black ops II, since this headset is marketed as the best headphone for this game. In fact, this design scheme makes it look pleasing and sophisticated. Had the designers used orange on any other place, it could have look gaudy and maybe even ugly. Moreover, this design matches with the receiver that also has a large Black Ops II Call of Duty logo emblazoned on the front. There is also a useful hanger that gives users the choice to hang the headphones when not in use. The receiver is powered by USB that can be connected to a PC, console or even a TV.

It is a good idea to keep the headset on charge all the time, though the company touts that it can last 9-10 hours on full charge. This full charge can take anywhere between three to four hours through the USB port.

These headphones come with a range of controls as is expected from a high-end gaming headset. On the left ear cup, there are four buttons, namely Main, Game presets, Chat or Mic presets and Power button. The main button turns on the Dolby Stereo sound system while the game presets have eight options. These presets are:

• Flat – to hear sounds without the presence of dolby digital stereo.
• Bass and boost – to listen to deep and thundering bass that can enhance the audio effects of some scenes.
• Treble boost – gives a boost to the higher frequencies to ensure that high notes are crisp and clear.
• Bass boost and treble boost – this preset boosts both the low-end and high-end notes for a greater amount of detail.
• Stereo Expander – comes with a 3D effect that makes it possible for users to listen to the subtle audio nuances.
• Action enhancer – amplifies the effect when there are weapons and ammunition.
• Footstep focus – highlights the focus o footsteps when an enemy is approaching.
• Superhuman hearing – increases the notes that cannot be heard by human beings. Humans can hear sounds that are in the range of 20 Hz to 20,000 Hz. With this preset, audio notes that are beyond this range can also be heard with clarity.

“The verdict – a great pair of headphones for gaming enthusiasts” 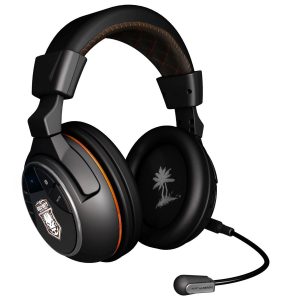 While some users would want to turn on all the presets to get all the effects at the same time, it is not such a good idea because the audio is likely to sound jarring when a game is played by a single user. However, if multiple players are playing together, then these presets can take gaming experience to new heights.

On the right ear cup, bluetooth control such as volume, mute and pairing are present. These controls make it easy for users to pair this headphone with any bluetooth enabled device. It can also be paired with any smartphone, so users can take audio calls with these headphones.

The surround sound is also amazing and they come with six presets as well. Though there does not seem to be much difference between each of these presets, it enhances quality when speakers are placed in different positions and angles.

With these different presets and options, these headphones enhance the experience of playing Black Ops II Call of Duty in a big way.

The verdict – a great pair of headphones for gaming fanatics and enthusiasts. Though it is on the expensive side, its many features and sound quality justify its price tag.